In Front of God and Everyone 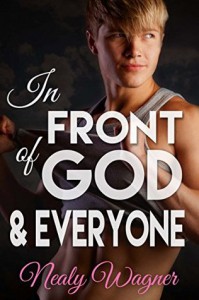 This book surprised me on many different levels, good and bad.


The premises drwe me in this time. Two boys, grown up in a cult in the bumfuck of nowhere, have to leave their home and survive in a world they know very little about. AND they have a crush on each other. What's not to like, right?

In theory, really not much. And there were quite some things I liked. The MCs were sweet, but not overly easy. Some of their struggles felt foreign, yet understandable. The writing was good, better than I feared, because yes, I am a little wary when it comes to debut books. I'll always give them the benefit of the doubt, but I also tend to go in a little sceptical. Can't help it. But there was no reason for concern here. Some ióf it might have been a tiny bit stilted, some dialogue might have seemed somewhat artififcal, but all in all I really couldn't complain.

What stuck with me most, though, is the massive potential of the story, all lying idle. Because there were so many moments that should have been more suspenseful, but were resolves too easily. The inner struggles and the fights with real life were there, but almost always had a superficial feeling to them. I was hoping for more every-day problems - like language, like issues of faith and guilt and self-discovery. It wasn't that it wasn't all there. But it wasn't enough, at least not for me. And it left me with a sense of dissapointment that I wasn't really able to shake. Even the conflict between the MCs wasn't what I was hoping for. The resolution, again, cam too easy, too fast, for me. And not all of my questions were answered.

All in all, I enjoyed this one, but I can't say that it blew me away. My issues might be my own, but because of them I can't give it more than 3.5 stars. I liked it, it was okay, but I was hoping for a lot more.