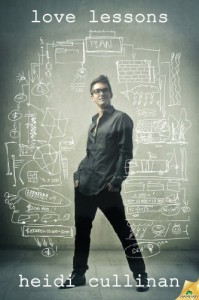 Such an adorable story! Kelly is one sweet small-town guy, full of hope and romantic ideas and I adored him from the get-go. What's not to like about a guy with a Disney-spleen, who is fan-boying so hard for Tangled - what I totally understand - and blushes harder than anyone I know? But he isn't just a blushing gay virgin, he's way more than that. And it doesn't take Walter, Mr. Campus-Casanova, very long to figure that out. What made Kelly so very special to me is his confidence and determination to stay true to his ideals (mostly) despite peer pressure, resulting ridicule or all the embarrassment he feels over his "naive" or overly romantic standards and expectations. It's not that he isn't "adjusting" them in a way, or learns to adapt them to real life - especially with Walter, but he still stays true to himself, finds himself even more because of it, and that is one special and respectable streak you don't find very often. And Walter? Walter might not be Flynn, or Prince Charming, but he could be one hell of a boyfriend if he would just LET himself. And I loved him so very much for trying. That was a very special kind of sweet.

I really enjoyed reading about their journey. Especially Walter broke my heart one time or three. Kelly might have been the one with the allergies and the "special needs" and the insecurities, but Walter? Boy, he's giving abandonment issues a whole new zip code. But these two together were just everything I needed to pull me out of a little funk. Sweet, romantic, sappy at times, adorable, but also hot. Even though this was not the raunchy, dirty kink-fest I've read from this author in other stories, it was still HOT.

The only little niggle for me was the pacing. Don't get me wrong, slow burn is right up my alley, and I'm not complaining about it. But during parts of the story I felt like it was dragging a bit too much, whereas the last chapters and epilogue felt somewhat rushed. Not to mention that the epilogue was a tiny little bit over the top for me. But that's minor details.

Overall I really liked the story, especially because it was more than just a little YA-romance on the side. It actually managed to be meaningful, sad, funny and light all at the same time. Definitely recommended as a sweet romantic read for hot summer days.
Tweet