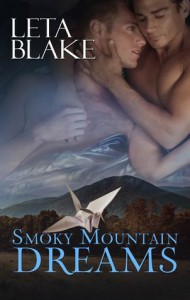 Hm, how to review this one?

Firstly, after recent developments I was happy to add this book to the "My rep" shelf. Jesse, a bisexual father of two pre-teens, falls for a voice before he even meets the singer. Christopher, failed Nashville survivor and said singer, is muddling through. He's still coming to terms with the way his life is going now, all the while dealing with a family that is... something else. But he and Jesse? Just click somehow. The families? Now that's a different story. Or more like half of this story, to be precise. Which is why I wouldn't recommend this to readers who don't like children or families having a big part in a romance novel. The family drama surrounding these two MCs is important, yet really fucked up. I enjoyed it immensely, all the angst included.

The other part I enjoyed was the sex. After having quite smoe problems with Leta Blake's approach to kink/BDSM in other books, I was a little apprehensive, but this was good. The sex was hot, raunchy, but not always perfect. Me likey.

Since I don't want to spoiler anyone, I'll put my thoughts on Jesse and his sexuality in the spoilers. It's not overly complex, or unique really, but for an MM book it made me sit up and read closely.

I saw a discussion of Jesse and his sexulaity that I found very interesting. Let me elaborate.

Jesse is bisexual. As a teen he always identified as gay, no questions asked. But with one girl - later his wife - things were different. Once he fell down that rabbit hole, there was no going back. He was attracted to her, he fell for her, he loved her. They married, had two children, Jesse was living a happy life. Mostly.

Things that happened later aside, Jesse was atttracted to men and women. Maybe only one woman, but a woman nontheless. Now, that's bisexuality. Nothing big, right? A different angle, since in MM, we usually see formerly identifying as straight guys falling for other men, but still. It's "just" bisexuality. But here's the thing. Many people usually call the books with bisexual characters in them Gay-For-You or Out-For-You, a fact that was "debated" a lot in MM over the last couple of months. (A description that obviously doesn't fit here. At all.) Most readers have lost interest in the topic again after never really going deeper than one blog post or two - most of them dismissive. I don't want to get into it again here, I don't even want to discuss it again, because honestly? I had enough pidgeons shitting all on my head for weeks and weeks.

But there was something I noticed that made me sit up ramrod straight. Some readers expressed how uncomfortable the "straight-for-you" episode/approach to Jesse's marriage made them, and how that came so dangerously close to the anti-gay argument that gays only have to find the right man/woman to become straight.

It's not like that's something "we" have been blubbering, gabbing and arguing about for months? In some cases even years? That you wouldn't call someone "straight-for-you" for exactly these reasons and because it's ridiculous? Well, at least I thought that way. Seems like I was wrong. Without rehashing everything again, I found it interesting how Leta Blake took the approach "from the other side", showed and wrote it well, and GAVE IT A NAME. No "straight-for-you", no "mostly/99% gay", not fluid, undecided, "gay with exceptions", but bisexual.

Speak with me: BI-SEXUAL. It's really that easy.

And it's really not that hard of a concept to put yourself in other shoes and see how the exact opposite of "straight-for-you" is "gay-for-you",  so why it's equally dangerous by implication? Why it's erasing bisexuality, no matter if intended or not? Why some of us *cough*me*cough* feel slapped in the face when a bisexual character gets 50 other labels - straight/gay-for-you episode, FFS?! - just not the one that fits, but on the other hand is declared to be "above labels"?

But that's just me. *drops mic and leaves stage*

All in all, I enjoyed this book a lot, even though some of it dragged a little at one point or the other. I was never really bored, so it was fine. The ending was sweet, if not a little more open than I would have liked for a 400 page story. But maybe we'll get a sequel exploring the loose ends a little more. Still a highly recommended 4.5 star read.