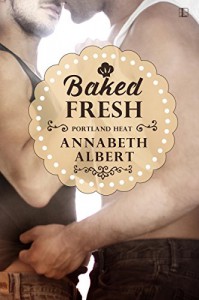 Another hit by Annabeth Albert! She's still my go-to author for comfort reads.

Shy baker VIc looses over 100 pounds after a loved one dropped dead way to young because of a heart attack. With the new year and another accomplished goal, there comes a time to determine a new resolution. And this year, Vic wants to date.

Unfortunately the one guy he really wants to ask out is not exactly available. Because Robin, a fellow volunteer at the homeless shelter, is still recovering from being dumped by his ex, among other things. His demons are his own, and at times I had a bit of a hard time getting into his head.

But somehow, things still fell together naturally anyways, all in good time. Vic was such a sweet but fllawed character, I couldn't help but like him. Robin was a little more of a mystery to me at times, but the things he went through to get where he is in the end, still broke my heart and made me a tiny bit teary-eyed at times. I wouldn't have minded to read more about him and his struggles, but for the short length of the book, it made me go through all the feelz in order to be very happy about the HEA.

All in all, another good instalment in the Portland Heat Series, and definitely one of my preferred comfort reads for dark days.